The first single from the upcoming album FROM THE HERMIT'S BEDROOM, THE CAUSE OF ALL MY SCARS has already been released as a gift for the GLAAD organization, but will also be released worldwide on the usual download and music-stream sites, on December the 2nd.
The single can now be downloaded here or be pre-ordered >>>here, at the AMAZON MP3 shop, and >>>here at the iTunes Store.

This December, the re-mastered album SELECTED SURRENDERS will be released through CROMMANIA RECORDS (the original record company who signed !JP in 1993).
SELECTED SURRENDERS is the first in a series of albums, containing music by !JP from the original albums, re-mastered, edited and sometimes an addition or alternative is added to the albums.
The first album to receive such a treatment is SURRENDER THE PINK (2004).
Soon available on Spotify, Deezer, iTunes and Amazon, but now already to be pre-ordered on this site or on #JK's BANDCAMP site. 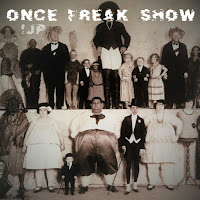 Very unexpectedly, the very dead band !JP released a collection of their best live-songs.
On ONCE FREAK SHOW, once more, the listener is treated to a little glimpse of a very interesting past, a fitting past made by the unique, sometimes grotesque, but always punk-rocking band !JP (a.k.a the Velvets of the new millennium).


Jean on the spotlight track:
"We played PORCH SONG TRILOGY in Canada, and the audience was so extremely rude. They talked through the entire performance, they didn't even clap when I finished a song. It was such a horrifying experience.
Then the owner of the stage demanded a break, a pauze in the performance. In his weird mind so that people could get drinks and talk about the Canadian weather. But they were already doing that! All through my fucking performance they kept ordering Molson's and talk about snow and grey skies.
I just said to my sound-guy: record it. On whatever kind of devise you can get your hands on. Just record it. I want to prove to the world, what kind of rude audiences there are. They just don't understand that it's more than just performance and giving them a hard-on. This is a fucking job, man. And not the most glamorous job, mind you!"