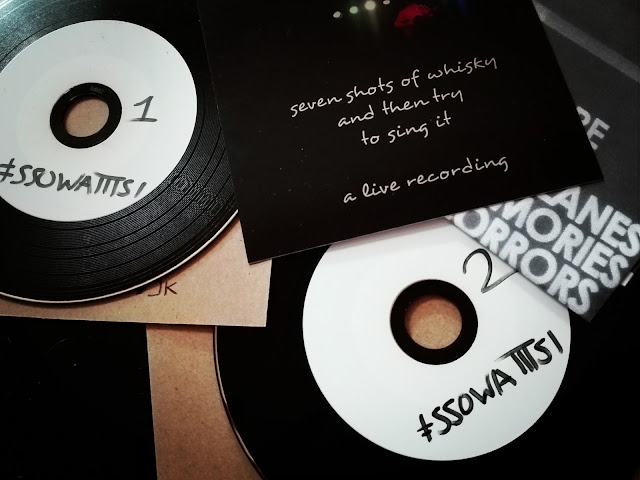 Official live albums and bootlegs are always a gamble. The major flaw with official live albums is that the recordings are often wrought with overdubs and studio re-recordings that often kill the songs. Bootlegs are often far more organic, but you never know what the quality of the recording will be. How many times have we spent $25.00 for a bootleg concert that sounds as though it were recorded on a home tape machine? A major flaw with both live albums and bootlegs are that the artist/band's performance often sounds thin, and the songs are usually not up-to-par with the studio recordings.

Official bootlegs are usually the best bet. Recorded straight from the soundboard and on to CD, the quality of the recordings are usually quite good and there are no unwanted overdubs are studio-re-recordings.

This brings us to the new Jean Koning "Seven Shots Of Whisky And Then Try To Sing It" (he is the most iconic when it comes to coming up with titles), a recording gathered from his 2017 World Tour. Simply stated, if you are a fan of Jean Koning, this set is a must have. "#SSOWATTTSI" does a fabulous job of capturing the ambiance, the essence of the show. I had the privilege of attending the New York City show, and when I listen to this CD, it really recreates the performance for me. It honestly feels as though I were reliving the show. Sure, he makes mistakes here and there (and his voice channels every drop of alcohol, every cigarette and every ounce of cocaine he ever put in his system), but I think those flaws create a punk ambience that many so-called punk bands these days seem to lack. He doesn't play everything perfectly, but this is a recording from a one-person live show, you can't expect everything to be impeccable. The mistakes do not diminish the greatness of the material, at any rate.

You could make a case for the redundancy of the set being a flaw. It would have been great to hear some of his material (that was not performed, probably due to the complexity of the songs i.e., more songs from his latest album "From The Hermit's Bedroom") with a full-back up band. But to argue that point would be missing the point of this live album. "#SSOWATTTSI" serves as a time capsule, a testimonial to Jean Koning's 2017 world tour. It was a tour of basic guitar renditions, so that is what you get here.

Obviously, not every song that you know and love is on the set, but most of them will be. Koning goes throughout his entire catalogue (including his !JP years) and each visited album is given fair treatment. And the songs are never played quite the same way as when they were recorded in the studio. Sometimes the tempo, arangements, and various other nooks and crannies will stand out to the attentive ear. The track selection, however, is mostly excellent.

One of the best attractions of this live album is its numerous arrays of cover songs. Some of these songs like Tom Waits' "Poor Edward" are obvious choices that one would think Koning would do a great job covering, since he has done so on one of his many albums. However, most of these songs initially seem really out-of-place. Who would expect Jean Koning to cover Placebo's "Nancy Boy," and Sex Pistol's "Pretty Vacant"? But Koning really pulls it off and makes these songs his own. And if Jean Koning can play a piece of shit like "Nancy Boy" and make it sound good, that says something.

If you are a casual fan, you may want to stick with Jean Koning's studio albums before investing time and money into this. But for the Jean Koning faithful that already own all his studio albums, this live album is a must-have. Jean Koning's studio albums are only half the story. He is one artist that you do not want to miss in concert. "#SSOWATTTSI" will forever immortalize Koning for future generations and for all time. Whether it is 2018, 2030, 2057, or 2105, "#SSOWATTTSI" will take the listener right to the show and recreate a magical moment from history. This album (his first official live-recording) does a superb job of capturing what makes his shows so special.