Charlie Know All...
"Small penises were considered ideal in ancient Rome and large penises unsightly, and you have to appreciate the tiny-dicked man who was able to get that trend going." -anonymous // Charlie Know All is a fun mix of essays on living and the world of men (thus, the "small penises" quote). Occasionally I throw in other stories of people or things that inspire me, or, at the very least, make me laugh.

subtitle:// Mr. #JK admits he had skin-cancer on the Peen.

A few weeks ago, Time Magazine published a cheery video on Facebook, which lead to an article, written by Alice Park.

The article, “Why Sunlight Is So Good For You”, originally published in August, covered mood disorders caused by a sunlight deficiency in our diets, commonly known as Winter Blues.

According to Dr. Normal Rosenthal at Georgetown University, Winter Blues—or as he likes to call it: Seasonal Affective Disorder, or SAD—is a feeling of sadness and hopelessness that occurs when people spend too much time indoors and—in a way—avoid exposure to natural light. The study says, that this all has something to do with the amount of serotonin that pours from the brain into our bodies. No matter the weather, direct exposure to sunlight forces the brain to build up the amount of serotonin, which then leads to a (more) happy person. A more healthy person even.

However, I missed one tiny detail in the article, which isn’t talked about enough to my taste: the destructive powers of the sun.

Two years ago, my father was diagnosed with skin-cancer. My diagnosis of the same form of cancer followed a year later.

In my father’s case, the skin-cancer was—apparently—clearly caused by an over-exposure to the sun. Not that my father always walks around naked; it just so happens that he was a roofer by profession. Which means that he worked in the outdoors, six days a week, fifty-two weeks a year. And over forty years of his life. Once retired, his skin turned against him.

At first he developed the milder type of skin-cancer called squamous cell carcinoma or SCC. This type of skin-cancer is found almost exclusively on sun-exposed skin such as the neck, face and arms, and the rate of development is somehow correlated with geographical location and the amount of sunlight a person is exposed to. More precise, the amount of UV-rays in that very same sunlight.

Yet, as time developed, so did his skin-cancer. And ultimately the SCC upgraded to the more life-threatening Melanoma. Supposedly that is a way of thanking a man for working very hard for forty years or so.

My skin-cancer, on the other hand, was more of a mystery, since it appeared on a part of my body that—to my knowledge—has never even seen the sun. While my father had his Melanoma treated, my dermatologist told me, that the ulcers on my penis—of all places—were in fact basal cell carcinomas, or BCC’s. These BCC’s tend to cause extensive local tissue damage. Considering the location on my body, I naturally freaked. Let’s just put it this way: there isn’t enough sunlight in the world to lift my—then—current mood.

﻿﻿
What Dr. Rosenthal—and the author Alice Park along with him—forgot to mention, is that too much exposure to sunlight is somehow, still correlated with skin-cancer. It has always been this way. It will always stay this way.

If there’s one thing I learned during my trip through the world of skin-cancer, it’s that we—as a human race, and more to the point, humans with a fair skin—do not protect ourselves sufficiently from the destructing UV-rays. Obviously we bring sunscreens along with us when we’re going to spend a day at the beach. We also tend to bring along some marvellous, tropically smelling SPF’s with us when we go on holidays to extremely sunny, white sandy locations somewhere on this globe. It’s not that we are all ridiculously irresponsible in that field.

But we should be smearing these same protectors on our skins when we go to work as well. Especially when you work in the outdoors. We should also be smearing these protectors on our skins when we organize a little barbecue in our backyards. Or any other garden-party for that matter. Because we tend to forget that the sun in our backyards is the same sun that lights up the Sahara. It’s the same sun that causes skin-damage in Australia. Just because your backyard isn’t anywhere near the Sahara or Australia, doesn’t mean that the amount of UV projected on your exposed skin is in any way less than “over there”. We tend to forget to protect ourselves in the safe and happy place we call “home”. And believe me: the sun does not discriminate.

Another scary thing I learned is that the skin-cancer type called Melanoma, kills an estimated 10,130 people in the US annually. Very bluntly that would mean that the sun—natural mood lifter by profession apparently—kills about 10,000 people in the US alone. Every year. Perhaps that motivates us to use sunblock more regularly.

Especially when you add climate change to that story. Whether it’s made up by politicians, hippies, religious groups or simple businessmen, we cannot ignore the basic signs this planet presents to us all. Things are changing. And perhaps you call it “oh, it’s just the weather” we cannot be naïve any longer.

I’m mentioning climate change, because a study by A.K. Bharath and R.J. Turner, published in the Journal of the Royal Society of Medicine, tie these three worlds all perfectly together.

According to this study “Ozone depletion has led to an increase in skin-cancers and worryingly this is still rising,” but a reduced Ozone layer is not the biggest issue here. The biggest problem we face, due to climate change, is a behaviour change. The greenhouse effect apparently causes wetter winters and dryer summers—in a very non-scientific nutshell.

Warmer, drier weather during the summer is likely to encourage people to spend more time outdoors. And it’s very likely that they go to the park—just to hang out with friends—unprotected. That’s just how the human mind works. “It’s basically my backyard. Sunscreen seems a little overdone.” And why shouldn’t we think this way? It’s not that this type of protect-yourself is presented to us in happy infomercials on a daily bases.

But more time spend outdoors, unprotected, leads to an increase of exposure to UV-infused sunlight. This may lead to an upbeat, happy mood, but the consequence of all this, will be an growth in the occurrence of skin-cancer due to this behavioural change, which is scientifically linked to the current environmental change and therefore very much visible to us all. Check an average Instagram account and count the number of exposed-skin-on-the-beach photos presented there.

However, according to Bharath and Turner, “the world has had about thirty years of public health initiatives and awareness campaigns. Perhaps we can regard these and more importantly act upon them? In order to protect the human race from this preventable threat.”
***
Additional note: How to deal with skin-cancer on the peen? Read all about that little adventure in "Twelve Step Charlie" 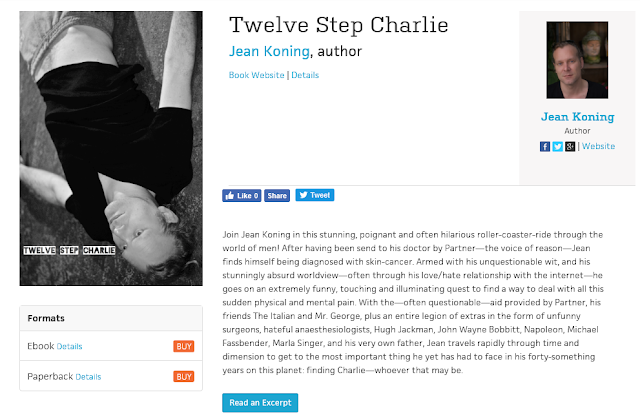 Buy the eBook @ iBOOKS or AMAZON