From The Hermit's Bedroom

He looks gazing balefully under a web of tribal henna tattoos. His expression leaves little doubt that he is perfectly willing to use a weapon if anyone dares fuck with him. He’s looks like he's a little out of breathe, after he's been out tramping in the swamp. There is dark magic at work, here. This man knows voodoo down to his bones. A wise man would turn around and head the opposite direction as fast as his feet can take him. A wise woman, too. He's the Hermit we all fear, living somewhere in a remote corner in every town. And by the sound of the album's production, he's a prisoner of his own echo, especially when listened to with headphones. The overall sound scares you to death. This is a baroque nightmare. This is what rock and roll sounded like four hundred years ago. And it should scare you to death. After all, who knows what Jean Koning might do? 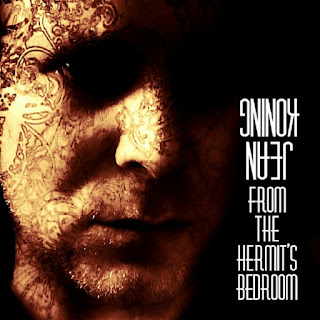 It’s been almost seven months since Koning slammed down the gauntlet and set his piano afire, willing and possibly eager to sacrifice anyone who spurned him to writhe in The Hermit's eternal, religious anger. Almost seven months since he held up his dripping heart freshly ripped from his chest for the world to examine. Almost seven months since navigating the labyrinth of emotional wreckage after what was thought to be permanent is wrenched apart.
From The Hermit's Bedroom still burns as hot as when first unleashed—the raw nerve endings exposed, the emotional swings still fresh.
And now there's the Extended Version, exclusively on Spotify. Seething more rage and the promise of retribution to give way to tremulous vulnerability. There’s towering self-confidence but the hurt and pain bubble to the surface easily and often. Some of it makes no sense in a literal fashion, but is meant to evoke feelings and thoughts through a word, or a sound, or a flash of imagery. From The Hermit's Bedroom - The Extended Version is a journey, one fraught with elemental human impulses. It’s a catharsis that’s harsh and beautiful and strange and bedevilling and contradictory, but never for a moment less than authentic.
There is a classical grandeur to From The Hermit's Bedroom - The Extended Version, a timelessness that stretches far beyond 2017. Jean Koning is simply not operating on the same plane as the rest of us. The imagery he employs, the power and conviction of his singing and playing, the defiantly unorthodox song structures, moments of astonishing beauty and harsh ugliness… it reflects the real dynamic of a relationship, perhaps many relationships, but it does so through the lens of fearless imagination riven from personal turmoil. From The Hermit's Bedroom is audacious, often difficult and impenetrable, not an easy listen that immediately captures its audience with sharp melodic hooks. It’s completely uncompromising, and if it seems to wallow in self-pity at times, well, that’s what we humans often do when we’ve been hurt down to our core. It’s an album like no other, and it only could have come from Jean Koning. It’s winding curves and unexpected trajectories are endlessly fascinating. Seven months have passed since the original version of From The Hermit's Bedroom was released and viscerally captured the feelings of countless people who have also lived the diseases, the terrorist tension, the internet menace, the heartbreak, the confusion and extreme turbulence the album expresses so poetically. People relate to it because it’s undeniably real and compelling, and often speaks to their own experiences. Its power is undiminished. From The Hermit's Bedroom continues raging unabated, eternal fires blazing.

From The Hermit's Bedroom - The Extended Version releases October 30th, exclusively on Spotify. 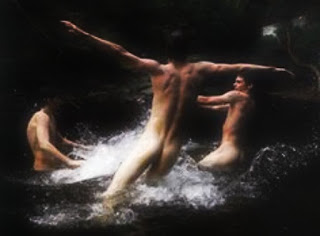