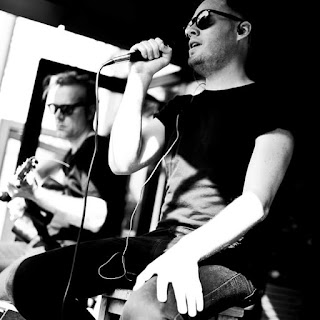 Ralph George surprised many last March by bringing out an album so small in scale, so finnicky and chilly, that many saw it as a stubborn step back into dilemma--something that seems unwelcoming in today's music industry.

Stylistically The Perfectly Imperfect Side Of Love saw him taking more risks than at any time since he first started putting out little videos of well-known cover songs on the internet. Combined with the song-writing gift of Jean Koning (and under his supervising production), the songwriter-pair came up with compositions which became a specialist lens through which to view spectral characters and stories otherwise lost to view.

Once again in Dog Koning has provided the settings for George's lyrical and vocal explorations. There's a familiarity in contending for space among Koning's often laden tonal picture. Where the lyrics might seem bereft or even hopeless, the tone is often contrastingly bold. "And we're gonna scream and shout it out," he sings almost triumphantly over a swelling, urgent piano in the alternative version of the song 'Dog'. In the song's final moments, to almost no accompaniment, George tells its whole secret story: "..or should I just shoot this dog down?"

It's a cold heart or a brave black humour that can abandon such a line. This is no mere murder ballad; this is torture stomp.

For all its surety and lust, this album deftly isolates some moments of dreamy uncertainty. 'Well, That's Love' is a photographic re-examination of an ended relationship, casting slight variations of perspective on the same small, telling events: "I was once a dreamer / Hiding from my life / You were such a predator / Hunting me just to stay alive" No modern songwriter is more capable of enumerating heartbreak's immersive power than Koning; snapshots of memory are examined for clues and flicked to the floor. But the pictures change for the looking, become meaningless. "So, you suffer through and through when they break your heart in two / But that's love," sings George. "Well, That's Love." Koning's guitar shimmers a chordal cloud of disquiet over the verses, then picks a silver thread through the refrain, and the changes in theme and pace contest one another for a way through the confusion. Musically as much as through the narrative, the song argues persuasively for the phantasmagorical turmoil in everyday tragedy, the awful specialness of common loss. It's George's good fortune that in this collaboration he can make such characteristic work, and Koning's loss that his contribution may well be overlooked.