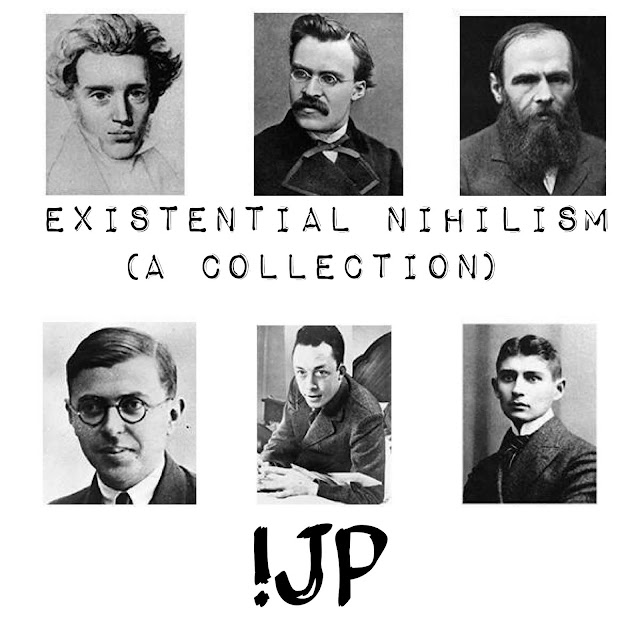 Existential nihilism is the philosophical theory that our life has no intrinsic meaning or value.
With respect to the universe, existential nihilism suggests that a single human or even the entire human species is insignificant, without purpose and unlikely to change in the totality of existence. According to the theory, each individual is an isolated being born into the universe, barred from knowing 'why'. The inherent meaninglessness of life is largely explored in the philosophical school of existentialism, where one can potentially create their own subjective 'meaning' or 'purpose'. Of all types of nihilism, existential nihilism has received the most literary and philosophical attention.
Existential nihilism by !JP is now available as a stream-collection on Spotify, Deezer, and Bandcamp (with the exclusive exception that the album can also be downloaded at the latter).
For more information concerning the songs, please check >>>this.
As for #JK, who was named after Sartre (which has nothing to do with the collection whatsoever, but is a nice piece of trivia you can throw around at cocktail-parties and the likes), all he likes to add to this collection is the following:
In his essay Existentialism is a Humanism, Jean-Paul Sartre wrote "What do we mean by saying that existence precedes essence? We mean that man first of all exists, encounters himself, surges up in the world – and defines himself afterwards. If man as the existentialist sees him is not definable, it is because to begin with he is nothing. He will not be anything until later, and then he will be what he makes of himself." Here it is made clear what is meant by Existentialists when they say meaning is "a consequence of engagement and commitment".